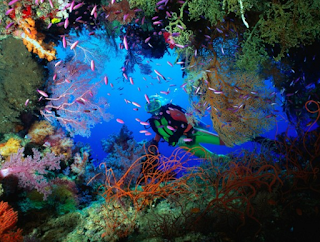 Each island has its own characteristics both of marine life that inhabit or essentially contour. Here is the description:
1. Wangi-wangi island presenting reef type with the majority in the form of wall contours.
2. Kaledupa island easy to find grouper and snapper. If a dive before or after the full moon we can see the activities of marriage grouper at a depth of 25-40 meters.

3. Tomia island have Reef fish are more diverse and abundant. Sensation is presented is swimming with hundreds to thousands of fish. Here the spread of table coral reef that is shaped table.

4. Binongko island is the only island that overlooks the sea Flores while other islands facing the Banda sea. This difference causes the reef on the island is dominated by soft corals elongated like a rope.
Another attraction in Wakatobi is the atoll or ring-shaped coral reef. Atoll Kaledupa along the 48 kilometers is one of the longest. When the sea receded, the atoll as islands emerging from the sea. Atoll reef in contrast to reefs around the main island.
Similarly article Wakatobi Indonesia | Diving With Thousands Of Fish. May be useful and be a reference to your destination. Thank you