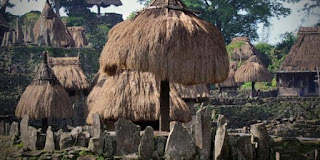 In the middle of the traditional village of Bena, there are a large stone berbnetuk umbrella called Ngadhu. Its function is as a place of worship and believed to be the media liaison Bena residents with their ancestors on the mountain top Inerie. While they do in the traditional ceremony Bhaga-shaped house on stilts and thatched roofs. There were nine tribes in the village of Bena namely Dizi, Dizi Azi, Wahto, Deru Lalulewa, Deru Solamae, Ngada, Khopa, Ago and Bena which is the oldest rwandese and founder of this village.
Residents of the Bena embrace matriarki system in terms of the marriage where the husband after marriage the wife will follow the family to go outside the village. They will gather back at the village festival held Bena Bena time that coincides with Christmas. At that moment all citizens will return home Bena ceremonies and also as the arena. To get to the village of Bena we can use the plane to Labuan Bajo. After that continue the journey by car to Bajawa.
Thus article Indigenous Village Bena East Nusa Tenggara. May be useful to the reader. Thank you