Skip to content
The Most Exotic And Romantic Beaches In Indonesia. The Indonesian archipelago of course has many charming beach for our visit. Some of them are already well known but some are not exposed to the media so that not many people know the existence of this beach. News and promotions should be further enhanced in addition to having the beach as seumber travel income for the country as well to further revive and stimulate the economy of the locals. 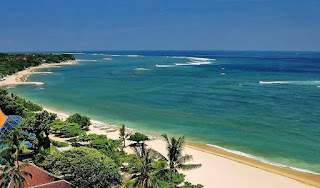 Here are the most exotic and romantic beaches worthy of our visit.

Located in the village of Liang Salahutu subdistrict, Central Maluku regency. Many also call Hunimua Beach. Because the underwater scenery enchanting, this beach was awarded as the most beautiful place in Indonesia by UNDP in 1990. The white sands which extend along the one kilometer by 300 meters wide. To get to the beach Liang fairly easy because a lot of public transportation to get there as the public bus or taxi. Her fairly close distance from the international airport Pattimura about 40 kilometers reached within 1 hour.

The beach is located in the village Purbayani, Kecamtan Caringin, Garut is more dikenaal with Rancabuaya name. From the heights we can see the beach and the sea off the Indian Ocean turquoise with waves tempting. A trip to the beach Rancabuaya an amazing experience with a stretch of mountains, rice fields and tea plantations were charming. To spend the night need not worry as lodging facilities and restaurants pretty much the various options.

Cape Coast High decorated with large rocks, white sand and the waves are friends. That said, this is the origin of the stone -Stone meteor. (See also:). These rocks makes the beach as a discontinuous which creates little booths along the coast. An incredible sight. In this area also made the film Laskar Pelangi. By using our boats can visit the island galangal contained an old mercusar. From the beach in front of the lighthouse we can swim when pasangatau walked across to the small island when the water receded.

The scenery on this island is so beautiful with the blue sea shady side by side with the green hills captivating. The trip to the island of Sebuku of Banjarmasin spent about 10 hours by land. First we set off from Banjarmasin to Batulicin who spent about 6 hours. Then proceed to cross over to Kotabaru for 1 hour. After that from the port of Tanjung Serdang use a motor boat to the River Bali, the capital island of Sebuku. Also see related article challenged nautical tourism Kotabaru, South Kalimantan.
Thus articles The most exotic and romantic beaches In Indonesia. Hopefully useful and thank you.