Salukkan Kalang | The longest cave in South Sulawesi Indonesia. Salukkan Kalang in the native language it means a dark corridor. The length of the cave which reached more than 12 kilometers to set up as the longest cave in South Sulawesi. Inside the cave is the underground river we will find some waterfall that has a height of 5 meters to 50 meters. To perform a search may only be conducted during the dry season because when the monsoon flooding can occur suddenly and surely endanger the safety of life. 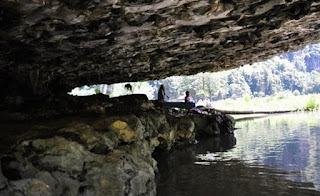 Kalang Salukkan cave located in National Parks Bantimurung Bulusaraung. One cave that reaches 20 meters in diameter located in the hamlet Kappang, District Bantimurung, Maros, South Sulawesi, Indonesia. It is quite close to Jalan Raya Makassar – Maros – Bone so it is not too difficult to reach this place.

Caves Salukkan Kalang be holding throughout the underground river in the Maros karst region. From here, the river empties into the waterfall Bantimurung. The depth of the cave is about 150 meters below ground level with a slope of 15 degrees. Salukkan Kalang is one of 199 caves in the national park Bantimurung Bulsaraung recorded by Tim identification and mapping the distribution of natural caves in 2012.
Similarly, articles Salukkan Kalang | The longest cave in South Sulawesi, Indonesia. Hopefully useful and thanks