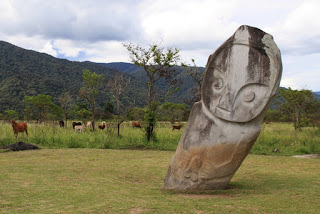 This area was first discovered by Dutch scientists in the early 20th century story hereditary mention these statues were made by the tribe Napu, Basoa and Bada. They are estimated to have had a more advanced culture at that time. However, a variety of myths coloring the story of the tribe, the valley and the megalithic statues. It is still a mystery because no one can be sure how the number and function of the petung. What is unique is this megalithic sculptures will not be found when deliberately sought.

Bada Valley included in Lore Lindu National Park area. By using small aircraft from landing at the airport can Palu Poso Tentena. Then proceed with the road trip for 4 hours toward Gimpu. After that still need 4 hours to Bada Valley. Here we can stay at home resident or guest haouse available.
Thus the article Mystery Of Megalithic sculptures In Bada Valley Central Sulawesi. May be useful and be a reference to our knowledge together. Thank you