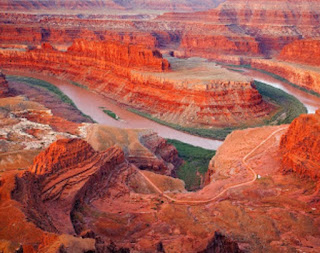 2. Grand Canyon National Park – United States
Grand Canyon is steep gorge carved by the river Arizona. This gorge including one of the wonders of the world and most are in the Grand Canyon National Park is the first national park in the United States. This gorge has a length of 446 kilometers with a width of 6-30 km and a depth of 1600 meters. Interestingly it is the inventor of the first Spanish man named Garcia Lopez de Cardenas in 1540.
3. Nastional Kruger Park – South Africa
The national park is the largest in the African continent covers 20 thousand square kilometers. Here we can see the typical African mammals and birds in large numbers. In the virtual world famous Kruger Park Nastional with a video titled “Battle At Kruger” where a fight between a group of bulls, lions and crocodiles.
4. Deosai National Par – Pakistan
The park is located in the valley Deosai located in 4000 meters above sea level. In spring the park is covered by an overlay of millions of flowers and different types of butterflies that will surely mesmerize the visitors and be a moment that can not be forgotten.
5. Kakadu National Park – Austrlalia
National park into one of the world heritage site is managed by the Aborigines and the Australian government. Kakadu has a beautiful view with a large waterfall and Aboriginal rock art. Kakadu is a saltwater crocodile habitat.
6. Iguazu National Park – Argentina
This national park protects one of the most spectacular scenery in Argentina and Brazil are the Iguazu waterfalls and subtropical forests. In 1984 this place was designated by UNESCO as a world heritage site. We can feel the thrill of riding the boat around hundreds of small waterfalls
7. Sagarmantha National Park – Nepal
National park located in Nepal and in the southern part of Mount Everest was founded in 1976 covering an area of ​​1200 square meters with the lowest elevation of 2845 meters and 8850 meters high.
8. Plitvice Lakes National Park
The national park is located in the Plitvice plateau is surrounded by three parts of the mountains in the Alps, namely Pljesevica, Mala Kapela and Medvedak. Geological conditions of the national park consists of waterfalls and streams with very clear water. Algae and mosses that live in this park gives a typical green color
9. Hortobagy National Park – Hungary
The first national park in Hungary this type of broad steppes with 8 thousand square kilometers. This national park has several endangered bird species and protect the Przewalski’s horse, as well as water birds who immigrated
Thus National Parks articles Most Amazing In The World. Hopefully useful and thanks