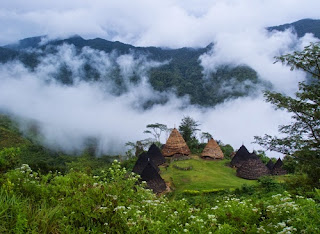 Arriving in the indigenous villages Wae Rebo we will find custom home seven black cone-shaped called Mbaru Niang. We feel daat daily lives as they like to sleep in mbaru niang, eat local dishes, to clean up the river. With the warmth and simplicity of this will be a very memorable experience.

Wae Rebo homeland traditional village located in the foothills, so often covered by fog. River water and the air is clean the food was delicious. Travelers can also learn about the local culture and architecture Mbaru Niang without nails and roofing. To reach the traditional village of Wae Rebo, tourists can via Labuan Bajo. Then proceed by land to the village Kombo, Denge village, subdistrict Satarmese, Manggarai and takes about 5 hours.
Thus the article Feeling the Life of Indigenous Village Wae Rebo East Nusa Tenggara Indonesia. Hopefully useful and thanks