Skip to content
Homepage / Wonderful of Indonesia / Diving with Turtles In Durai Island - Anambas - Indonesia
Diving with Turtles In Durai Island – Anambas – Indonesia. Durai Island is one of 238 islands located in the waters Anambas, Riau Islands Province (Riau), Indonesia. Durai on the island that are not too spacious the turtle lay her eggs. And on this island we can also mennyelam with the turtles. Anambas a lot to offer so many different things. Here are some favorite places such as coral divers Katoka, Pulau Tokong Malang Biru, and the location of Seven Skies tanker which sank in 1969 in the waters of Pulau Tioman. If lucky divers will witness whale sharks. 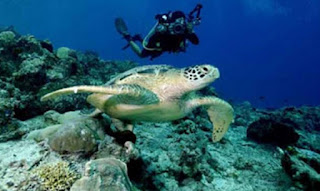 Another attraction is the coral in the lagoon that formed the cluster of five islands: Lower Island, Sanggah, Murbah, Sticks And the Eagles. When the sea receded, sandbars and coral stood out as as a connector of the five islands. From the lagoon water surface we can see sea fish that wander into the white sand bottom.

Aircraft from Tanjung Pinang and Batam airport for flights to the airport on the island of Matak, Anambas, six times a week. If using sea transport, ship Pelni pioneer of Tanjung Pinang is leaning 2 times a month in the Port Terempa.
Thus the article Diving Together Turtles In Durai Island – Anambas – Indonesia. Hopefully useful and thanks.