Caves Tewet East Kutai Indonesia | Rock Art Paint the Past. Inside the cave there are ornaments tewet rock art with different motives. Carrying around 200 rock art various shades of lines, dots and plain. There is also a painting of palm with red, brown and black. Researchers call this painting as rock art paint. It is estimated this artwork 10 thousand years old. Surrounding communities believe that the painting symbolizes their relationship with the ancestral spirits. 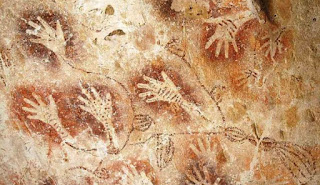 Tewet cave which is a kind of horizontal cave located in the area kaerst Sangkulirang Mangkalihat, Village Tepian Langsat, Bengalon, East Kutai, East Kalimantan, Indonesia. It takes 15 hours from Balikpapan to this place by road and then by a small boat ketintiting from nearby villages. According to the story the locals, Tewet taken from the name of someone who has found the first time this cave.

Researchers and art observers from Indonesia and abroad who are interested to learn about and trying to uncover the meaning and intent of this tewet cave paintings. until now has not been revealed exactly the mystery behind it. However, generally speaking implied that the early humans have been able to create art in the form of paintings.
Thus the article Cave Tewet East Kutai Indonesia | Rock Art Paint Jaman Purba. Hopefully useful and thanks